What Is a QR code?

A QR code (abbreviated from Quick Response code) is a type of matrix barcode (or two-dimensional code) first designed for the automotive industry. 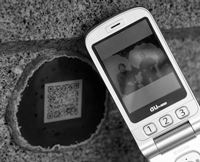 More recently, the system has become popular outside of industry due to its fast readability and comparatively large storage capacity. The code consists of black modules arranged in a square pattern on a white background. The information encoded can be made up of any kind of data (e.g. binary, alphanumeric, or Kanji symbols). Created by Toyota subsidiary Denso Wave in 1994, the QR code is one of the most popular types of two-dimensional barcodes. The QR code was designed to allow its contents to be decoded at high speed.

The technology has seen frequent use in Japan and South Korea; the United Kingdom is the seventh-largest national consumer of QR codes.

QR codes are practically everywhere in Japan nowadays, but here’s a unique take on the technology: the gravestone makers recently announced plans to begin selling gravestones with the two-dimensional bar codes embedded into them.

By simply snapping a shot of the tag with their cellphones, visitors will be able to view photos, videos and other information about the deceased. The device would also keep a log of each time the code was scanned so family members can keep up to date with when other relatives last visited the site.

A QR code on the headstone acts as a link which enables users of smart phones and mobile tablets to scan and automatically connect to a personalized website. It can be viewed on the phone or mobile tablet as visitors wander through the cemetery or by simply typing in a unique web address into your computer internet browser.

Any relatives of Yingling on here???

I love you Grandpa George

I was actually looking you up as one of the friends from yesteryear that I would've like to reconnect with, but, I found your obituary instead, I was very saddened by my find. I am sincerely sorry that you had to leave to go to the other side.

I am sure to tell you that I had cried for days, I wish that I had found you still here with us, anyway, whenever I think back to our young days, I always think of you as my best friend when we were youngens. I will pop in to write you a message again soon

Miss you very much

Looking to contact and connect up with the daughter of Winthrop Andrew (1914-1979)and Elizabeth Vandenburgh Andrew, her parents and sister to Winthrop Andrew Jr. (1936-1995). Winthrop

You are Lisa Marie Wheeler or Phelps? So, are you claiming to be the eldest daughter of Arthur S. Radtke? Born 9/25/36.

Its to bad he deseased so young

Wish you knew where Richard Nixon was buried? How about your great-grandfather?

Sysoon is a free resource for finding the final resting places of famous folks, friends and family members. With millions of names, it's an invaluable tool for genealogists and history buffs. Sysoon memorials are rich with content, including dates, photos and bios. You can even leave 'virtual flowers' on the memorials you visit to complete the online cemetery experience. Sysoon also contains listings for thousands of celebrity graves, making it the premier online destination for tombstone tourists.

You can become a member, create a memorial, submit data, add flowers, add photos and search our database at no charge.